I was ORIGINALLY going to make this page a HUGE ass beginners guide to playing IIDX but then I realized that I don't care to type out that much shit. (Yes, believe it or not, this page right now is SHORTER than I wanted it to be originally). SO
1) Fuck you
2) That's okay I'll give you some general information on what IIDX is for people that have never heard about it before
3) I'll also copy & paste a big ass comment I posted on Reddit to tell somebody how to play IIDX
4) This page will primaryilyiliylyliyly be used for me to post my favorite songs from IIDX/BMS and nerd about shit.

Beatmania IIDX is a "falling note"-style rhythm game where you use 7 keys and a turntable. 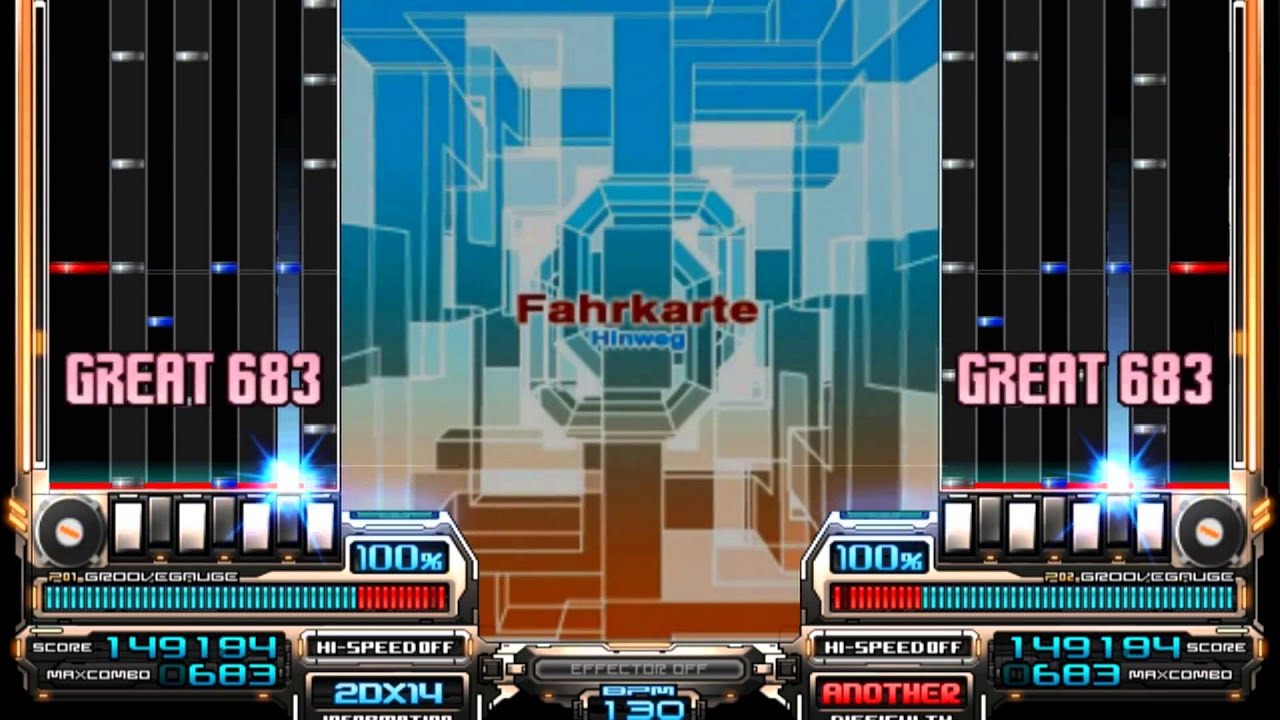 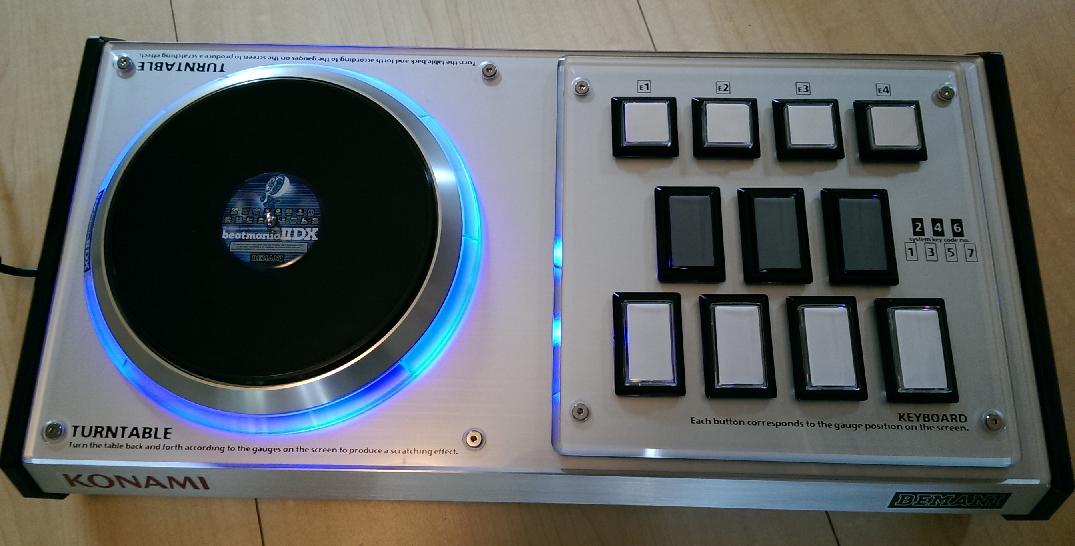 This isn't EXACTLY what a IIDX arcade cabinet controller looks like, that's actually a controller for people to play IIDX at home with, so it's slightly different. It's just hard to find good, high-quality pictures of full cabinets. 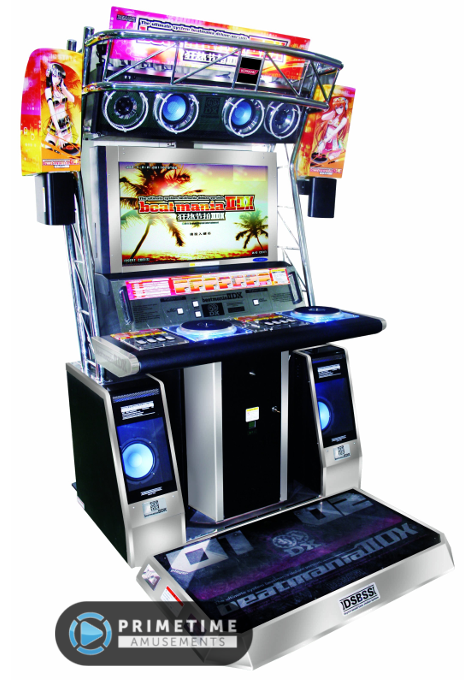 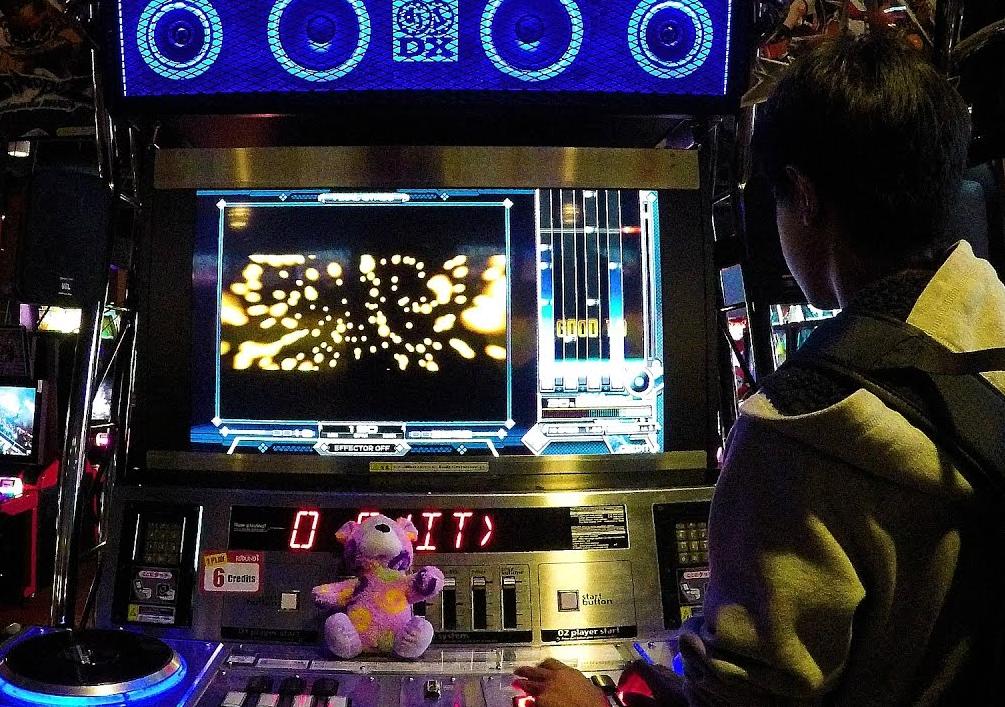 (idk who that dude is on the right, i just found this on google images, but thats a cute pic. i like the little plush on the cabinet lol)


OKAY ENOUGH RAMBLING. How da hell do I play this awesome ass game????


Well, there's a few ways to play Beatmania. First, is Beatmania IIDX INFINITAS, the official PC port of Beatmania IIDX. It's ~$15 USD a month (give or take, it's Yen converted to USD), and a bit of a pain to set up, but ultimately a great experience. They also have a demo of INFINITAS that you can download, that gives you access to 3 songs, just so you can try it out. I personally recommend INFINITAS, it's my most played out of all the options here.

Then there's Beatmania "simulation" games - like how Stepmania is a "simulation" of Dance Dance Revolution. The most popular sim is Lunatic Rave 2, but it's VERY old (it started development in 2008, last update was in 2010) and not fun to work with. There's also Beatoraja, which is also very popular, much newer, and a lot more stable, but (in my opinion) slightly more confusing to use, and it lacks a few of the features LR2 had.
In order to play a sim, you need "BMS" files, which are the IIDX equivalent to SM files for Stepmania. Here is a guide to BMS, and it includes links to some starter packs. Both Lunatic Rave 2 and Beatoraja also have great custom skin support, if that's something you enjoy. Here's a list of a bunch of Lunatic Rave 2 skins (the website is a bit of a pain in the ass to navigate, you'll get the hang of it though), and here's a list of a bunch of Beatoraja skins. Just so you know, most Lunatic Rave 2 skins can be used on Beatoraja, with little to minor problems, but Beatoraja skins can not be used on Lunatic Rave 2.

There's also lesser known IIDX sims, such as Bemuse (which is web-based, if you want something quick), QMS, and charatbeatHDX VIOLET, but I personally don't recommend playing on them. They aren't particularly bad to use, but they just aren't the cream of the crop when it comes to community involvement. Here is a list of almost every BMS player out right now. There's a lot of them, most of them aren't very good, and they date back to the late 90s, but it's always good to have options if you don't like the popular sims.

There's also the PS2 games, which are old, expensive, and hard to come by, but a great way to experience IIDX. If you do play the PS2 games, you should look into purchasing a PS2-compatible IIDX controller. However, most of them EASILY go for $100+ USD at their CHEAPEST. They do have a very rich singleplayer experience though, and plenty of unlockables. If you're dedicated, have the money to spare, and you have a Japanese-capable PS2 (or a FMCB card), those games are a great option.

You can also play the arcade games on PC illegally, but I will not be telling you how to do that. Look into it yourself ;)

If you end up playing on PC, then playing on Keyboard is perfectly fine. You won't be "judged" or looked down on for playing on Keyboard, a LOT of players do. There's a few common key configs, the most popular one you'll see is Left Shift for scratch, and ZSXDCFV for the buttons - or Left Shift for scratch, and ASD (space) L:" for buttons. I personally use Left Shift for scratch, and AWDOLP" for buttons. The only time you're going to be bottlenecked by played on keyboard will be on "scratch" charts, AKA charts with a lot of dense scratch notes, but that won't be a problem until very late-game. Playing on a controller is extremely fun, but the price for entry is very steep. I wouldn't recommend buying a controller at all for brand new players. You may not even end up enjoying the game that much, why waste so much money on a controller.
If you DO end up wanting to buy a controller, my personal recommendation is a Phoenixwan, which I personally play on. There's also the Phoenixwan+, which is newer, but a little more expensive. If you want something a little more compact, you can check out the FPS, but the turntable is very small on it. If you want something like the arcades, there's also the Real Edition. There's also controllers that aren't sold from Gamo2, like the Yuancon Dx5th, but I don't know anybody that owns one, so I can't vouch for the quality. You can also build your own controller, but I don't know much of anything about that.
Also, regardless of what controller you get, your controller needs BUTTONS! So, here are two guides on understanding, and picking out good buttons for your controller.

My best advice is to watch DJ Darqs' discussion videos. He's made a lot of videos over the years, that range from learning about IIDX hardware, to specific mechanics in the game, to lingo for IIDX. He's done it all, I swear. The dude is such a good IIDX teacher that he became an actual teacher in real life LOL. There's also iidx.org, which is less of a skill guide, and more of a technical guide on how IIDX works. It focuses pretty hard on the arcade games, but most of the information will transfer to INFINITAS, and some will also transfer to sims. A lot of that information, despite being more technical, will inadvertently make you a better player, just by understanding how the game works. And, obviously, just playing the game and trying to pay attention to what mistakes you make will make you a better player.

Don't get caught up in what difficulty you play. A pretty common beginners trap I see is that a lot of people will OBSESS over what difficulty charts they play, but the truth is that is just doesn't matter. Play what challenges you enough to learn, but not so challenging that you feel like a failure. Some days will just be off-days, and you may play a difficulty down from what you typically can do. Some days, you're playing like a god, and can play a difficulty UP from what you typically can do. Just play what's comfortable, but exciting. It's also worth mentioning that the difficulty scale for IIDX changed from game-to-game over the years. A level 6 chart from the early games are nothing like a modern-day level 6, and hyperfocusing on clearing a 6 JUST because it's a 6 is just damaging to you. If you want a more accurate representation of your skill, shoot for higher DAN ranks.

Don't make your HI-SPEED (AKA note speed) super high just because you want to look cool to other people. Play at a speed that's comfortable for you to read on that chart. On charts that are too easy for me, I usually lower my HI-SPEED because there's simply less notes on screen, and less of a need for them to be so spaced apart. Setting your HI-SPEED too high WILL make you play worse, so just make it comfortable for yourself.

This only effects you if you're playing on a sim, but don't always trust the difficulty level on the BMS you're playing. Obviously, anybody can make BMS, which also means that anybody can set it to whatever difficulty they want. There's tons of mis-rated BMS, whether its because the author doesn't KNOW what the actual difficulty is, or just because the chart is old, and based on a scale that people don't use anymore. It's also worth noting that BMS and IIDX have slightly different difficulty scales. A 12 in IIDX =/= a 12 in BMS. To have more accurate difficulties for BMS, consider learning about Difficulty Tables, or consider donating to DESOUT2 and using their "Litone" series of Beatoraja skins. The Litone skins feature an automatic difficulty-rating AI that will show the "actual" difficulty of BMS, as shown on the left of this image of the song select screen, where it says "AVERAGE"/"END"/"PEAK". It's extremely helpful! And once again, this info only matters if you're on a sim, the actual IIDX games don't have this problem.

And without further ado, here is a list of my favorite bangin ass songs from IIDX, sorted loosely by release.
Songs with a

= SUPER favorite song and I love it VERY MUCH. Not that I DON'T love the other songs very much, its just that the songs with a

are like. VERY EXTREMELY special to me. Made me CHANGE THE WAY I think of IIDX.
THESE ARE THE CATH CERTIFIED BANGERS!!! If you have access to IIDX, give 'em a play!!

You should probably pause this btw
Song: good-cool - Hitch Hiker

SLAKE - MUSIC TO YOUR HEAD